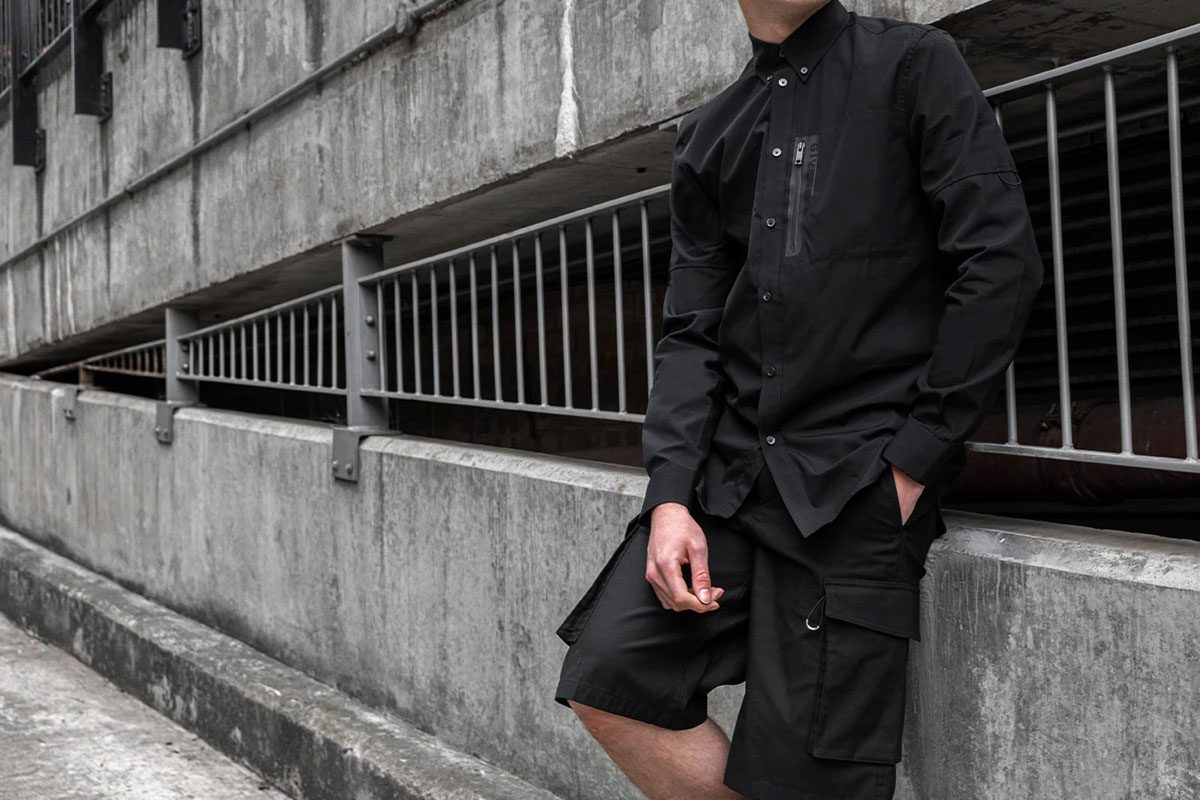 Givenchy continues to blaze the trail for modern luxury fashion, infusing artisanal details, graphic and symbolic imagery and streetwear-inspired schematics into their contemporary collections. It’s no wonder then that they should recruit 1017 ALYX 9SM’s Matthew M. Williams to helm the label, a designer whose own creative ethos seems to align perfectly with their own progressive vision for the future of Givenchy.

The incredible new arrivals to our AW21 Givenchy edit have inspired us to reflect on our full Givenchy showcase and explore some of our favourite styles in much finer detail than ever before. Here are a handful of designs that we’re currently obsessing over and how best to style them this season.

Newly appointed creative director Matthew M. Williams’ affinity for body modifications and gothic imagery is the driving force behind the tattoo-style graphics that permeate his latest collection. Comprising of a wicked combination of barbed wire, flaming skulls and otherworldly beasts, Givenchy’s Black Gothic Print Oversized Hoodie takes on a distinctly heavy metal-inspired persona, one that so effectively captures that brilliantly dark and rebellious attitude that the designer has become so celebrated for. It also marries well with Givenchy’s modern, streetwear-informed approach, appealing directly to the virtues of a radical and rebellious youth subculture. We imagine that was precisely the brief that Williams was tasked with fulfilling when he was appointed as creative director of the famous Maison. We’ve paired ours with Amiri’s Bandana Thrash Antique Black Jeans to compound on the edgy rock’n’roll aesthetic. 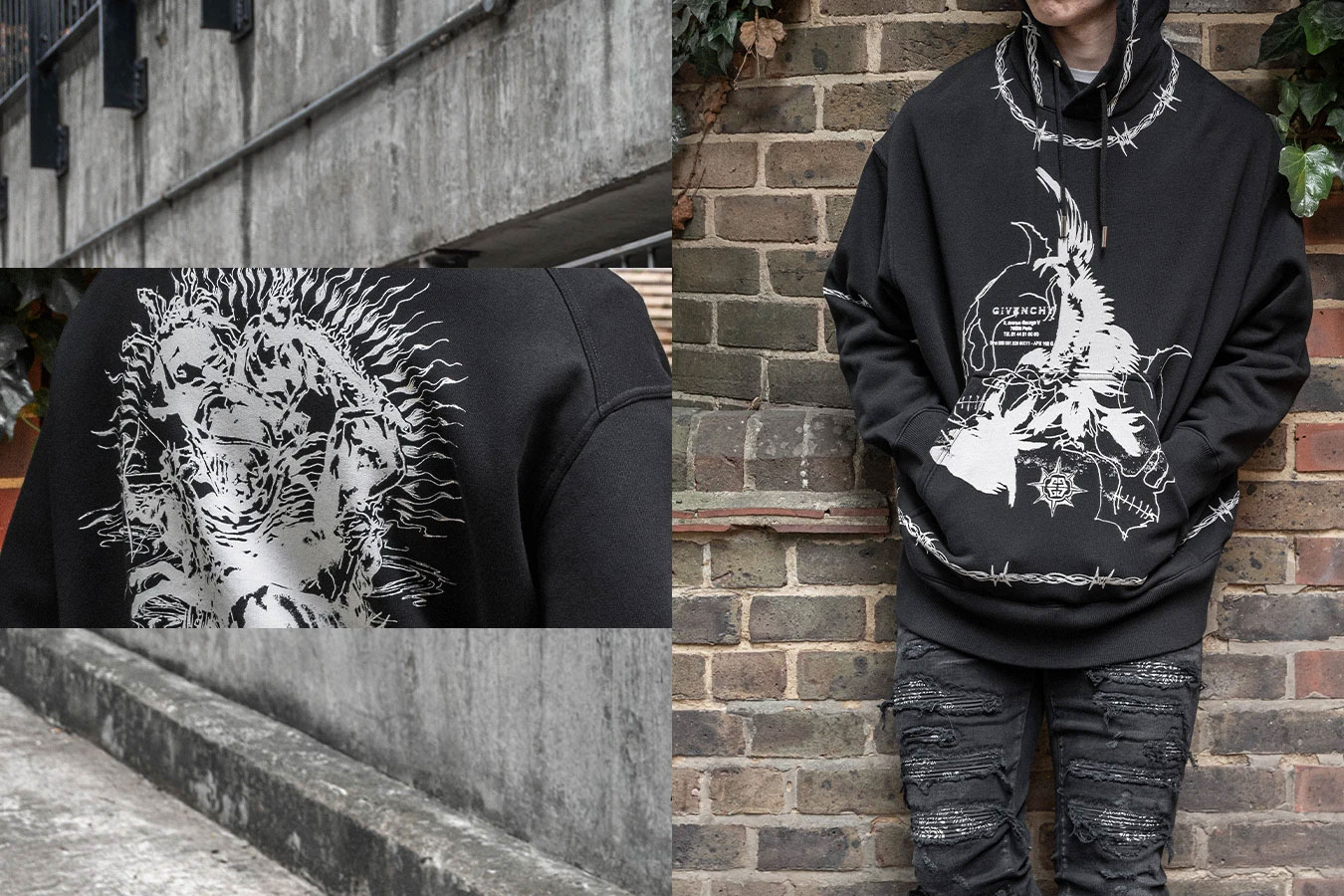 Givenchy Red Rip Detail Oversized Sweatshirt is yet another excellent example of Matthew M. Williams’ personality and trademark quirks bleeding through into his art. The standout feature here is of course the metal ring piercings that are scattered throughout the garment, once again hinting at his passion for body art and mods and also his tendency to incorporate metallic hardware into his designs – a hallmark of his creative process both at Givenchy and his own label 1017 ALYX 9SM. The neat rips and tears help to reinforce the distressed aesthetic and anticonformist appeal of the full collection. Pictured here with Givenchy’s Black Cargo Shorts. 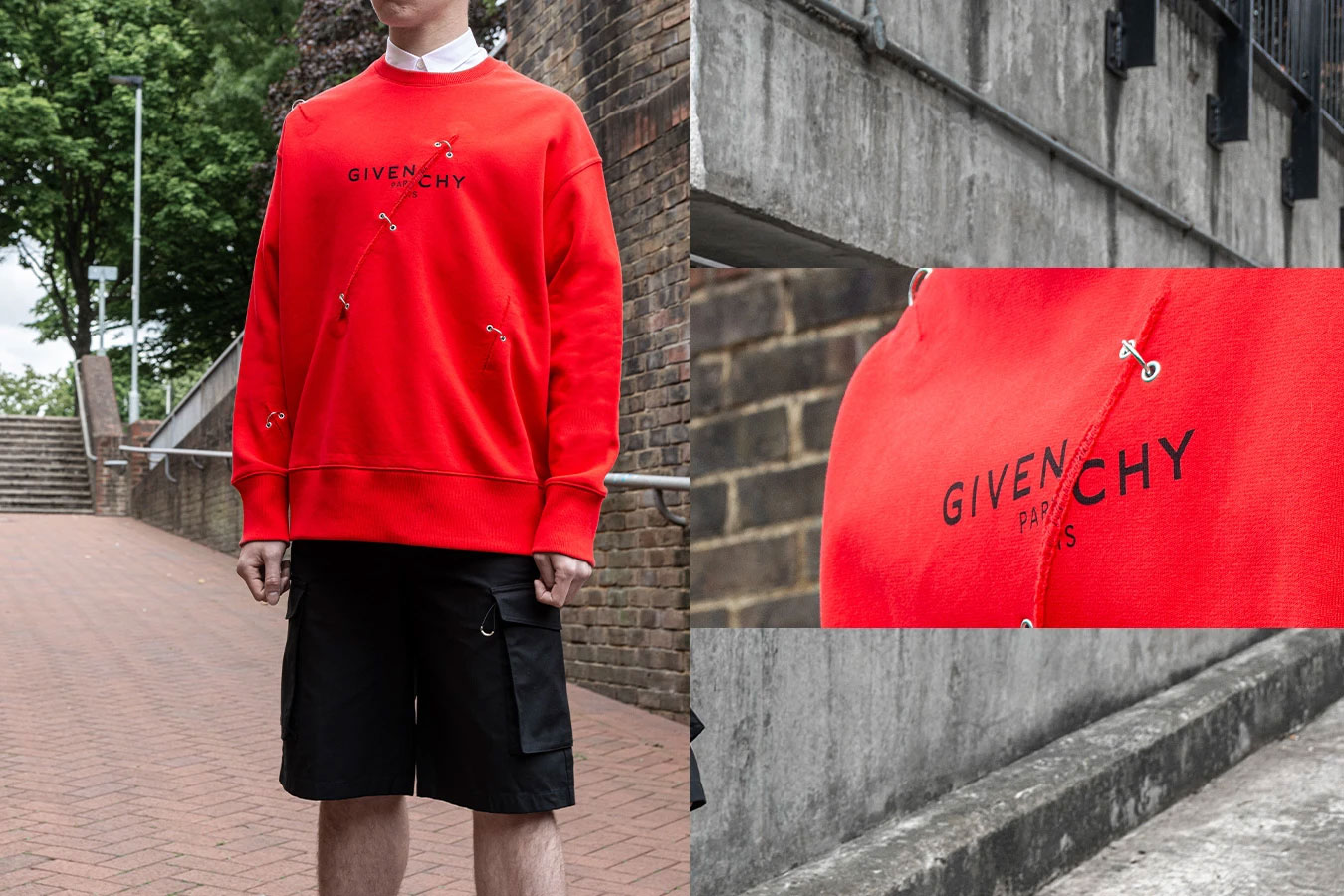 There’s an intriguing air of surrealism surrounding Givenchy’s Black Gothic Graphic Oversized T-Shirt, one that’s exacerbated by the graphic’s intentional obscurity. Squint hard enough, and you can just about make out the silhouette of a demonic figure riding some hellacious beast. It’s a call back to classic heavy metal imagery typically found on album covers, t-shirts and posters during the genre’s heyday in the 80s and 90s. It perfectly illustrates the overall tone of this collection and makes for another compelling addition to the dark and rebellious story that Matthew M. Williams is trying to tell. 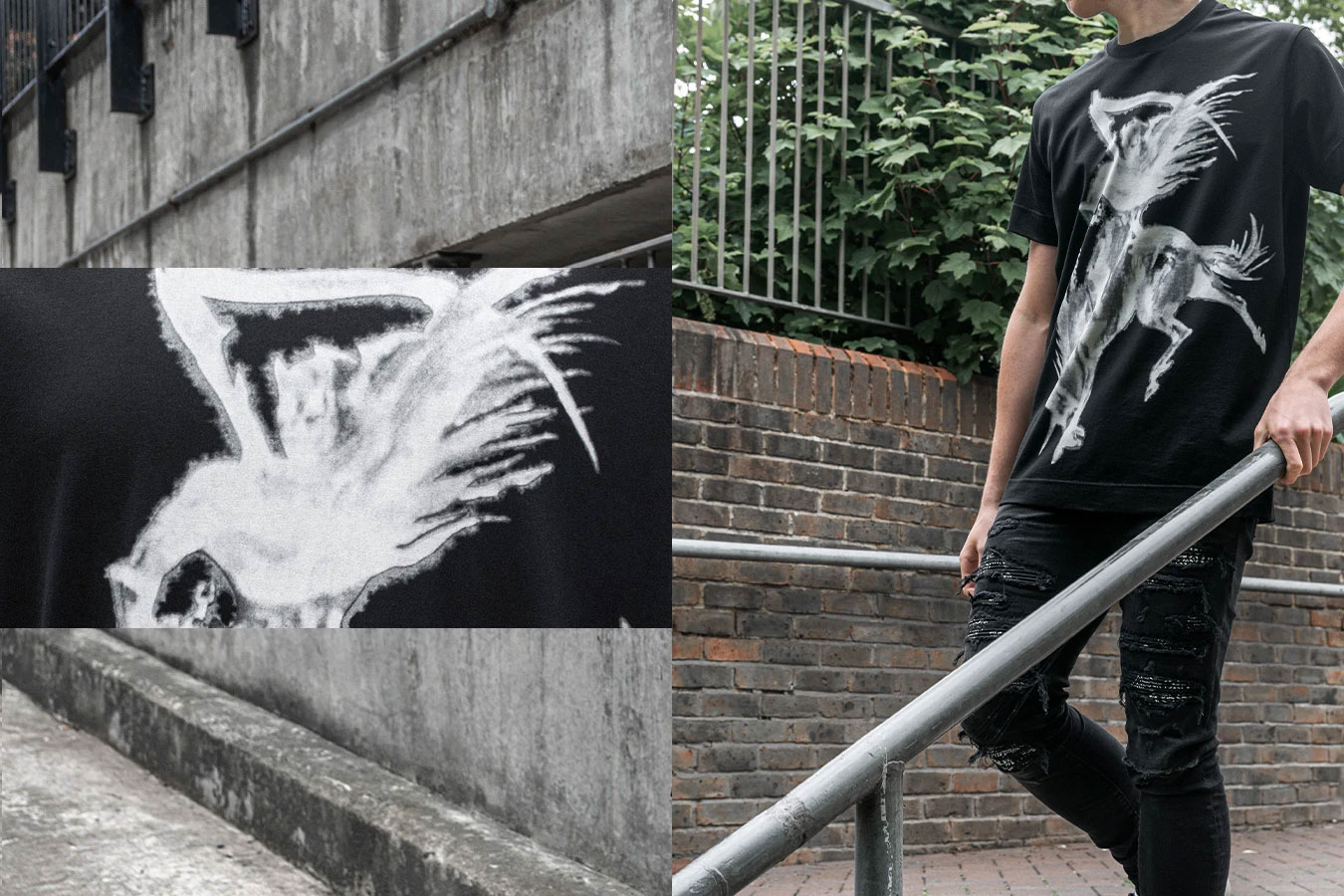 We love how the blazer has become such a versatile wardrobe component in the contemporary fashion scene, capable of adapting to varying degrees of formality, as per the occasion. Givenchy have taken that ideology to the next level with their featured Black Technical Blazer, a piece that possesses an outdoorsy, almost utilitarian quality due in part to its polyester-blend fabric construction and heat-seal taping detail. Characteristics such as these suggest a more informal, easy-going vibe, one that would likely steer a stylist away from the formality of traditional tailoring and more towards the creative freedoms afforded by off-duty dressing. We’ve offered two potential looks for this blazer, one with a decidedly more smart-casual presence and another that embraces its aforementioned utilitarian spirit with Givenchy’s Black Logo Zip Trim Shirt and Black Cargo Shorts rounding out the look. 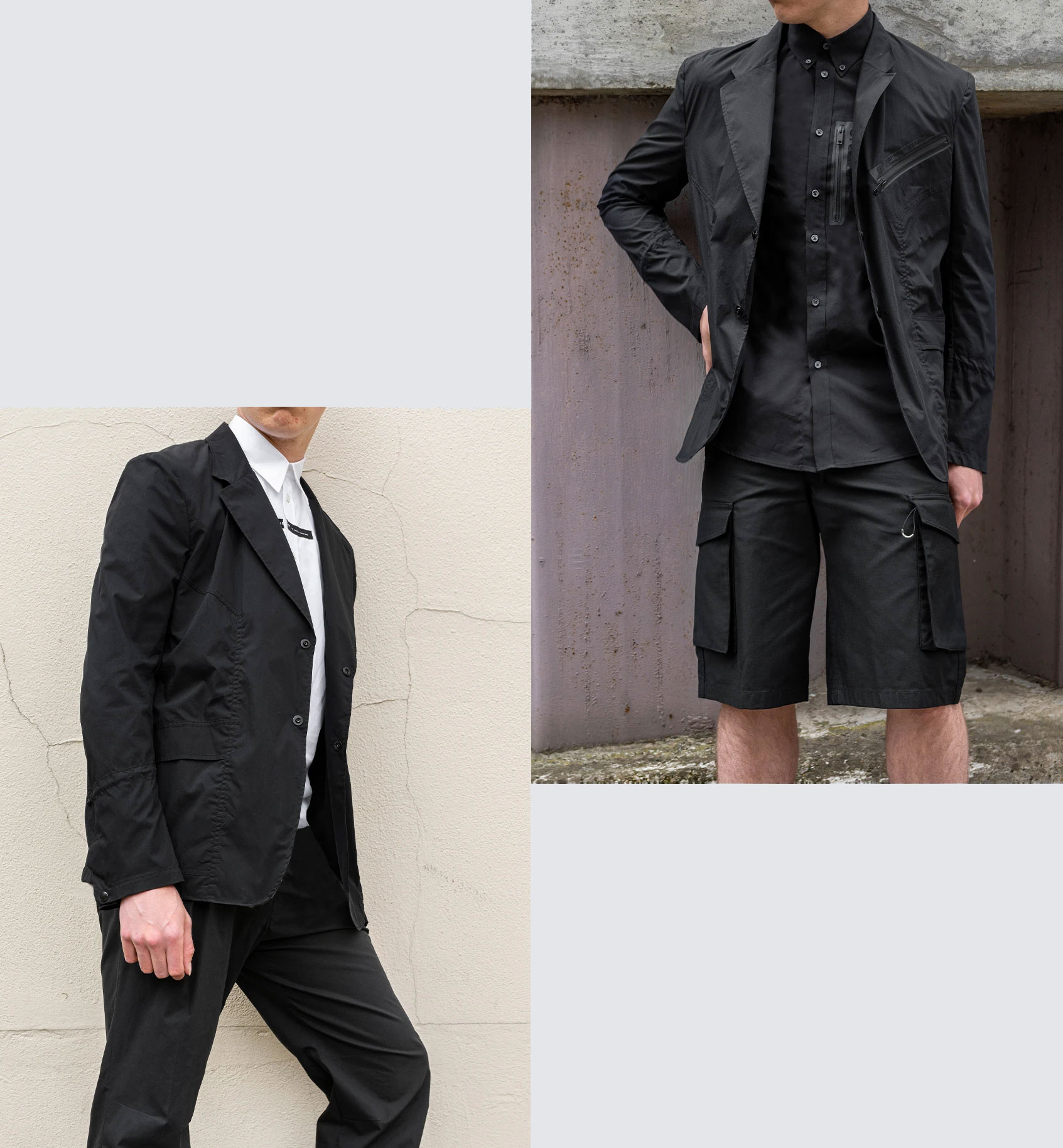 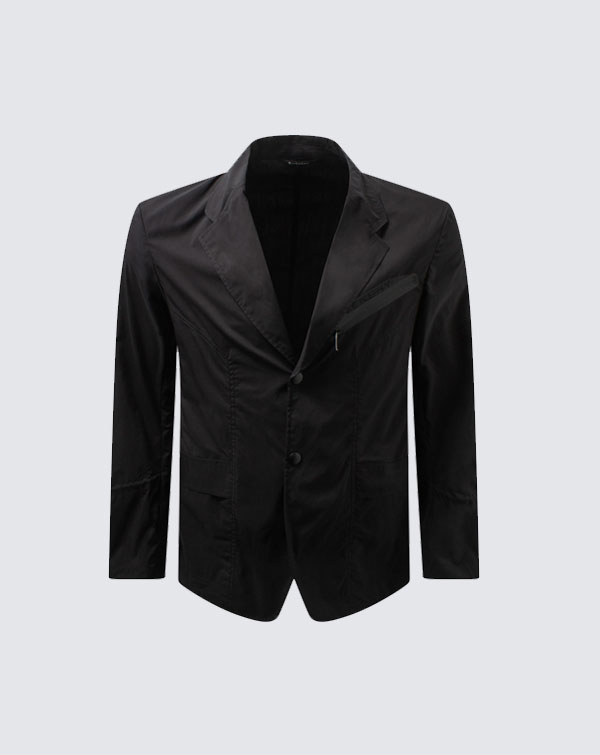 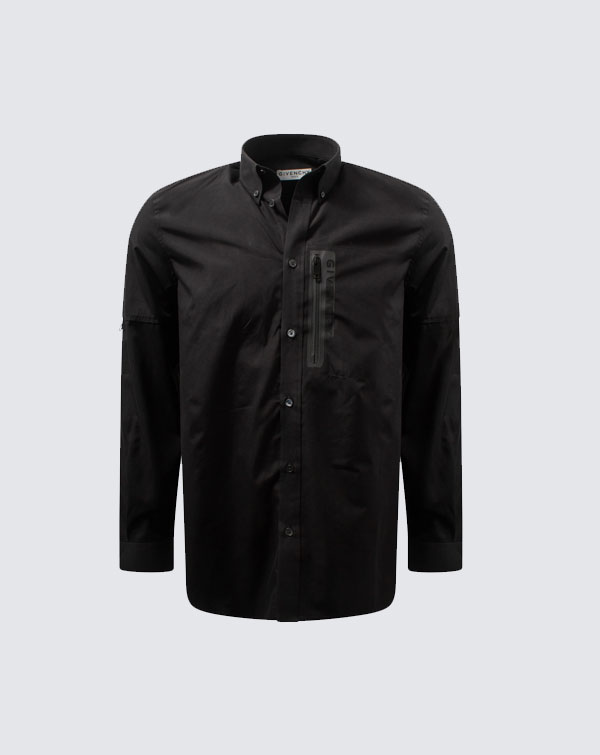 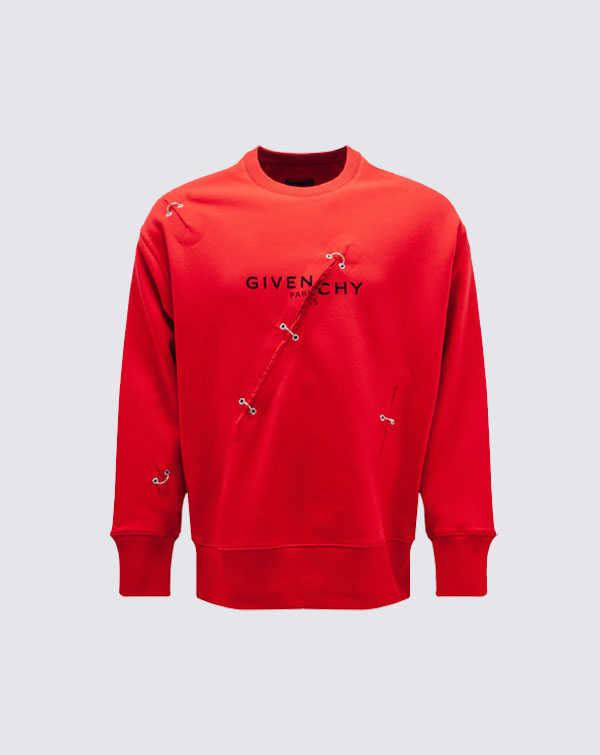 Ripped-effect tears throughout the garment Silver-tone me... 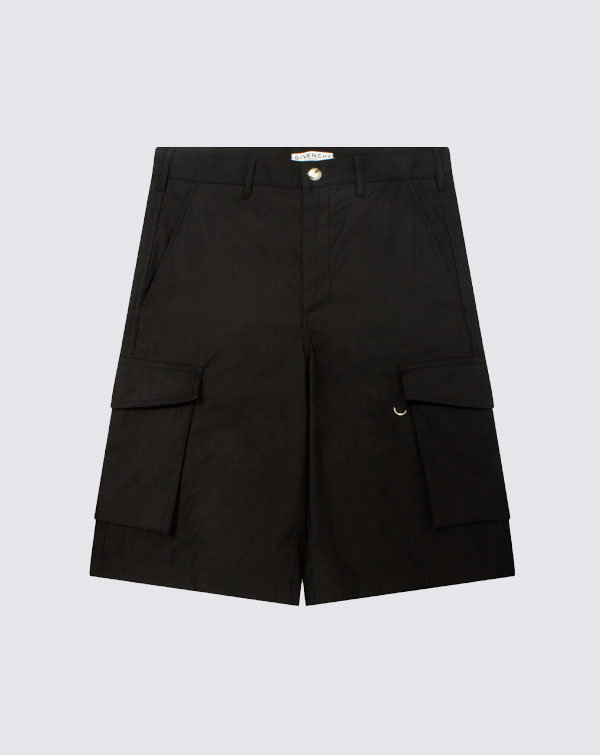 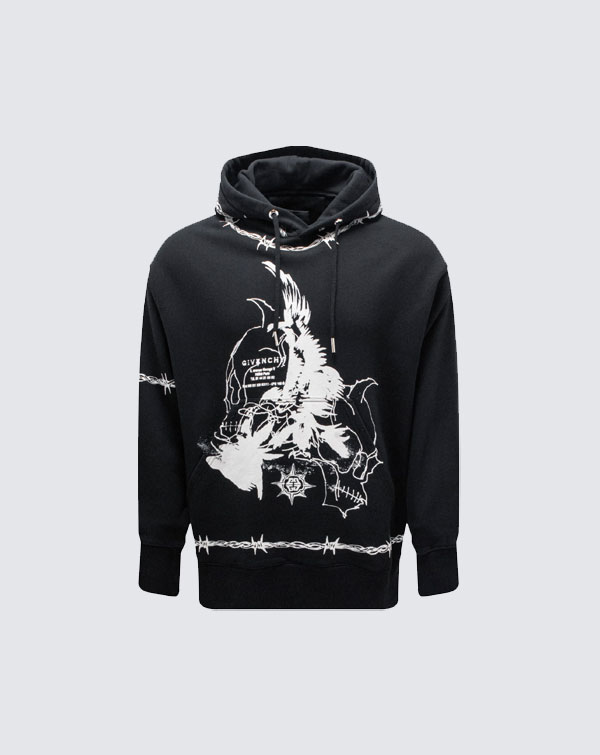